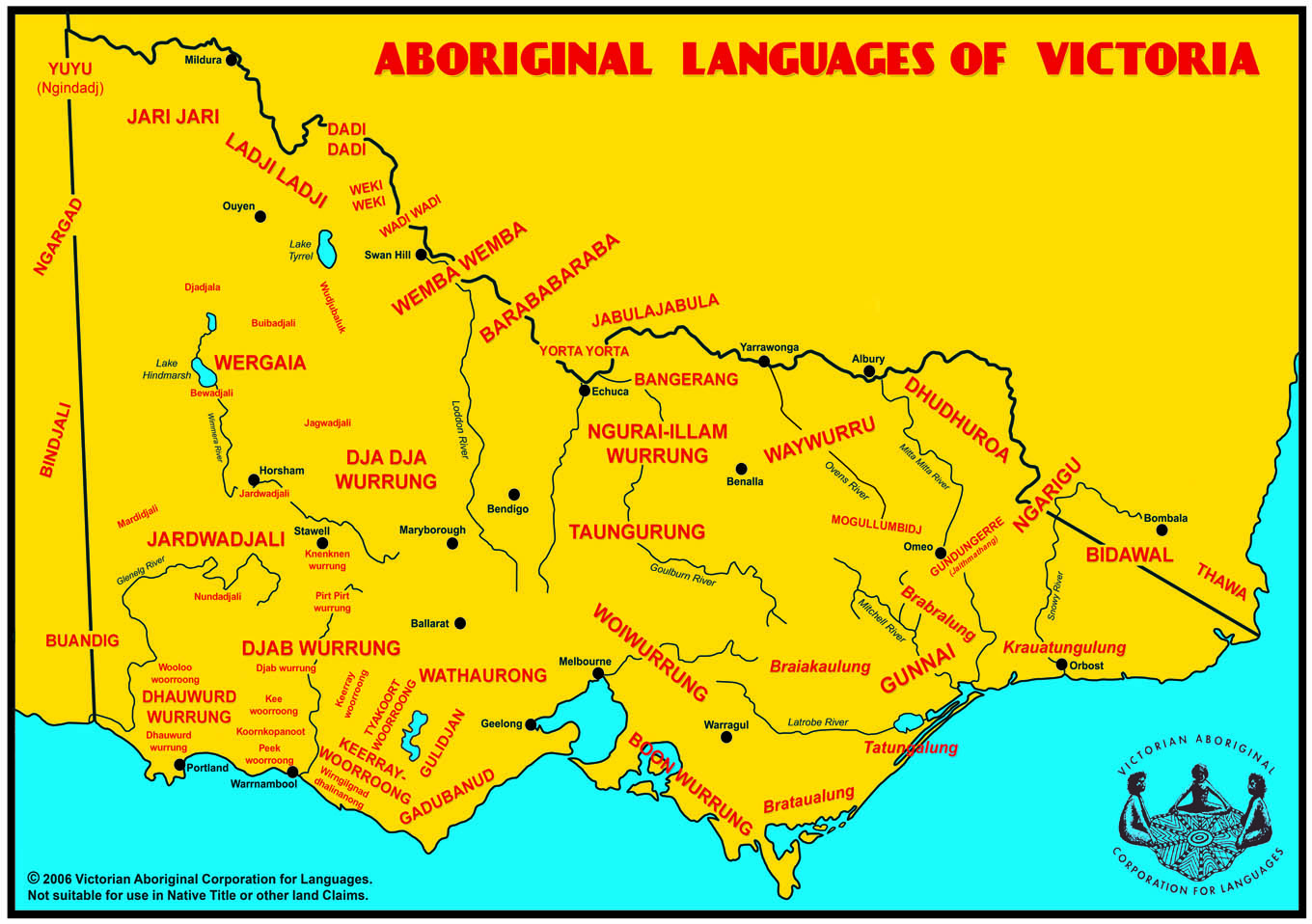 As seen in this Victorian Aboriginal Corporation for Languages map, over 36 Aboriginal languages were spoken in Victoria pre-contact. But the effects of contact and policies of past governments, including the forced removal of children leading to the Stolen Generations, disrupted the continuation of many of those languages. Only a few remain today that are still spoken fluently.

The Kulin Nation consists of the five language groups who are the traditional owners of the land in the Port Phillip region:

Their collective traditional territory extends around Port Phillip and Western Port and up to the Great Dividing Range and the Loddon and Goulburn River valleys.

These language groups are connected through shared moieties – the Bunjil (wedgetailed eagle) and Waa (crow). Bunjil is the creation spirit of the Kulin and Waa the protector of the waterways.

Archaeological evidence has shown Aboriginal occupation all over the Port Philip region dating back thousands of years pre-contact. Within the land of the Kulin there are about 1500 archaeological sites of various types. About 200 are within the Melbourne metropolitan area itself.

A waterfall was once located at Queens Bridge in the Melbourne CBD. This was an important resource for the Kulin people as it separated the upper and lower parts of the Yarra river. Above the waterfall the river contained fresh, clean, drinkable water; below the waterfall it mixed with seawater from the bay and was rich in natural resources. The stones at the top of the waterfall also provided an easy way to cross the river but this crossing was destroyed in the 1880s and covered by the bridge.

An Acknowledgement of Country is a way to demonstrate respect to First Nations people and culture and their positions as the Traditional Owners and Custodians of the land you are on when meeting. It should not be confused with a Welcome to Country, which can only be performed by a Traditional Owner of the land; an Acknowledgment of Country can be given by anyone and should be sincere, respectful, and personal.

This Acknowledgment has been endorsed by the Courts Koori Elders Caucus, who have advised that it is appropriate for all staff who work at Court Services Victoria. Additionally, the following guides provide a template for how a judge might open County Koori Court hearings in different parts of the state.

If you don’t know who the recognised Traditional Owners are for an area, you may consult this Victorian Aboriginal Heritage Council map.

Aboriginal language and communication in the courts

As these materials demonstrate, the diversity of Aboriginal languages and meaning of words may lead to significant misunderstandings in court. It is important for judicial officers and tribunal members to be aware of this in order to avoid error or injustice.

Bail is a significant matter for Aboriginal and Torres Strait Islander accused, both because of their overrepresentation in the criminal justice system and for cultural reasons.

The reasons in these bail applications highlight the importance of considering and accused’s Aboriginality in determining whether to grant bail.

There are Koori Courts in three Victorian jurisdictions, with the County Koori Court drawing on earlier successful implementation of Koori Courts in both the Magistrates’ Court and the Children’s Court.

The objective of each Koori Court is to ensure the Aboriginal community is more involved in sentencing by providing for Aboriginal Elders, Respected Persons, Koori Court Officers, community organisations, community groups, and family to play a part in the process. It is a much less formal proceeding; participants are encouraged to use plain language and sit together around a table where Elders and Respected Persons may give cultural advice to the judicial officer to help them make a culturally appropriate decision that helps reduce the likelihood of reoffending. The Elders and Respected Persons may also speak to the offender about their circumstances and why they are in court. The offender also has the opportunity to speak for themself.

The County Koori Court sits at:

The Magistrates’ Koori Court may have jurisdiction under ss 4D-4G of the Magistrates Court Act 1989 (Vic) to deal with a proceeding if an Aboriginal offender has:

The Magistrates’ Koori Courts sit at:

The Magistrates’ Koori Court does not currently have the ability to hear matters involving the breach of a family violence intervention order, although a recommendation has been raised to remove that limitation.

The Children’s Koori Court was established to address the overrepresentation of Koori youth in the criminal justice system. The Court aims to reduce offending behaviour and reduce the number of young Koori people being sentenced to a period of detention.

Under ss 517-520 of the Children, Youth and Families Act 2005 (Vic) the requirements necessary for the Children’s Koori Court to hear a matter are the same as in the Magistrates’ Koori Court, except that the Aboriginal child need not plead - or intend to plead- guilty, they may also have been found guilty.

The Children's Koori Courts sit at:

Supports and services for Koori offenders

This brochure outlines the services available at Wulgungo Ngalu for Koori men on a community correction order. It provides an opportunity for them to learn new skills, connect with culture, and participate in programs to help address their offending behaviour.

Information on services provided by Ngarra Jarranounith to support adult men at risk of using family violence to create positive change in their life.

Bunjilwarra is a Koori youth alcohol and drug residential healing service designed to connect young people with Aboriginal culture while supporting their rehabilitation from alcohol or drug abuse.

MDAS provides a wide variety of services to the Aboriginal community in the Northwest. Those relevant to sentencing include the following:

VACC provides a variety of services to the Koori community in the southwest. Those relevant to sentencing include the following:

The Coroner’s Court of Victoria has a Koori Engagement Unit to help families navigate the Coroners Court and provide additional support during the coronial process. This includes delivering sensitive information on behalf of coroners, helping families understand information contained within a coronial brief and providing support during court proceedings. Enquiries can be made to the Coronial Admissions and Enquiries on 1300 309 519.

Judicial officers and practitioners may also be assisted by the Court’s Practice Direction No 6 of 2020: Indigenous Deaths in Custody.

Marram Ngala Ganbu is the Koori hearing day in the Family Division of the Children’s Court, hearing child protection matters at both the Broadmeadows and Shepparton Magistrates’ Courts. Marram Ngala Ganbu aims to provide a flexible, culturally affirming and safe court environment and process that enables greater participation by family members. Koori Conveners sit at a number of Children’s Courts within the Family Division.

If a Child Protection worker places an Aboriginal child or young person in out of home care, this must be done in line with the Aboriginal Child Placement Principle.

Resources and supports are also available to aid Koori families appearing before the Court.

VCAT also provides videos showing how the Team can assist, suggestions on how to prepare for a hearing, and instructions on how to book a Koori hearing room where Koori participants can feel safe and comfortable.

VOCAT has a Koori List to assist members of community who have been the victims of crime. Proceedings are governed by Practice Direction No 2 of 2009. VOCAT has published the Dhumbumana Healing Strategy 2021-2023 to support its delivery of services that are culturally sensitive and well regarded by the Koori community.

Reports, papers and other resources

One of the recommendations of the Royal Commission led to the creation of the Victorian Judicial Officers’ Aboriginal Cultural Awareness Committee (‘JOACAC’), in particular the Commission’s finding that judicial officers’ lack of understanding of the cultural and socioeconomic issues affecting Aboriginal and Torres Strait Islander persons coming before the courts was one of the contributing factors to their overrepresentation in the criminal justice system.

Supreme Court of Victoria Justice Jane Dixon and Magistrates’ Court of Victoria Magistrate Rose Falla are the current co-chairs of JOACAC. Its members include judicial officers from each Victorian and Federal jurisdiction, and Aboriginal and non-Aboriginal Victorians who have an interest in educating judicial officers about Aboriginal and Torres Strait Islander cultural awareness. The Judicial College has supported JOACAC to design and deliver educational programs since 2007, including an annual series of ‘Koori Twilight’ seminars, visits to significant sites, and multi-day cultural immersion events known as ‘Back to Country’.