The purpose of the Family Violence Protection Act 2008 is to promote safety for people who have experienced family violence, reduce its prevalence, and increase accountability of family violence perpetrators.

The College has developed a Family Violence Bench Book, which provides a detailed explanation of the legislation and the social context of family violence.

The resources on this page complement those in the bench book by: 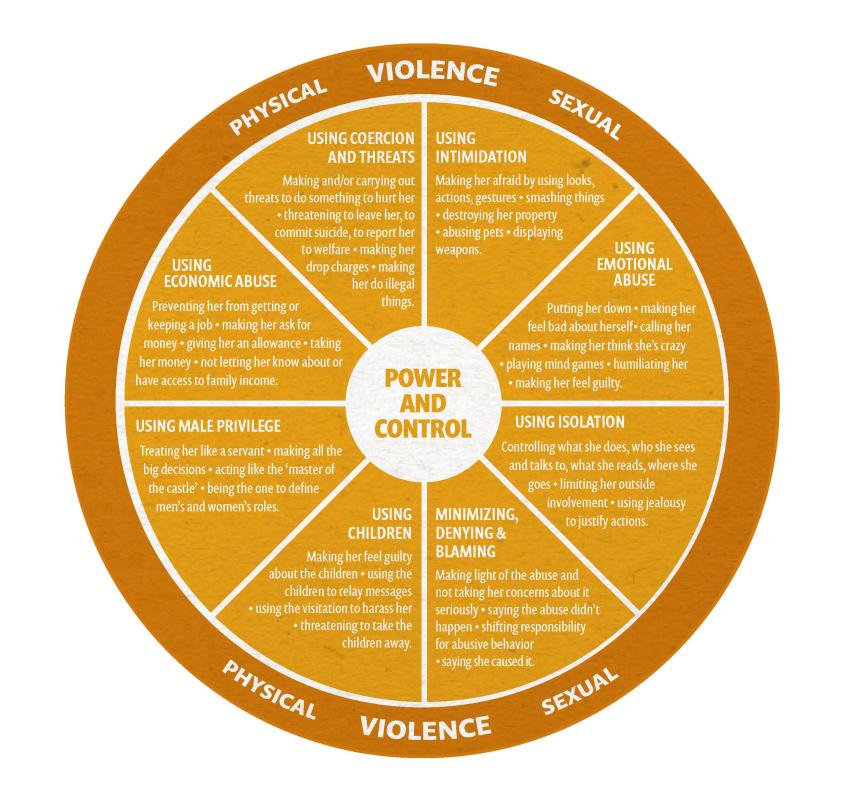 At the centre of the wheel is 'POWER AND CONTROL'. The word 'VIOLENCE' is accompanied by the words 'PHYSICAL' and 'SEXUAL' on the outer rim. These terms on the rim of the circle demonstrate how power and control can be forced in an explicit way through sexual and physical means. The circle is divided into sections, demonstrating other ways power and control is wrongfully pervaded. The sections display clockwise:

Using isolation – Controlling what she does, who she sees and talks to, what she reads, where she goes; limiting her outside involvement; using jealousy to justify actions.

Minimizing, denying & blaming – Making light of the abuse and not taking her concerns about it seriously; saying the abuse didn't happen; shifting responsibility for abusive behaviour; saying she caused it.

Using male privilege – Treating her like a servant; making all the big decisions; acting like the 'master of the castle'; being the one to define men's and women's roles.

Using economic abuse – Preventing her from getting or keeping a job; making her ask for money; giving her an allowance; taking her money; not letting her know about or have access to family income.

Using coercion and threats – Making and/or carrying out threats to do something to hurt her; threatening to leave her, to commit suicide, to report her to welfare; making her drop charges; making her do illegal things. 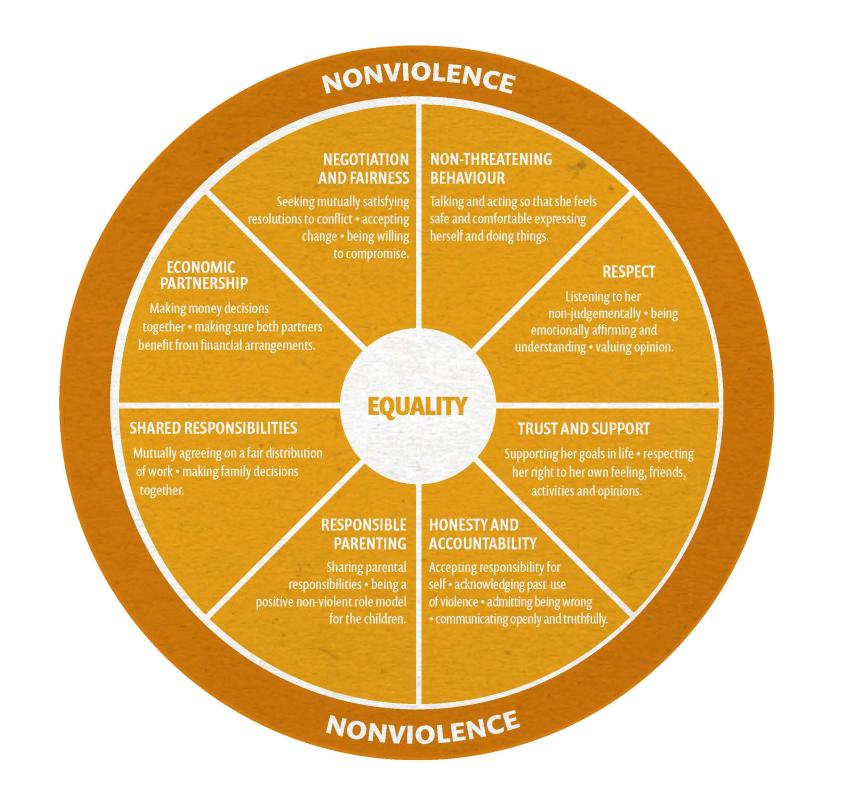 The Equality wheel helps articulate what a non-violent, equal relationship looks like.

At the centre of the wheel is 'EQUALITY'. The word 'NONVIOLENCE' is on the outer rim of the circle. In between, it is broken into sections signifying the linking components that lead to a non-violent and equal relationship. These sections display clockwise:

Non-threatening behaviour – Talking and acting so that she feels safe and comfortable expressing herself and doing things.

Respect – Listening to her non-judgementally; being emotionally affirming and understanding; valuing opinion.

Trust and support – Supporting her goals in life; respecting her right to her own feeling, friends, activities and opinions.

Honesty and accountability – Accepting responsibility for self; acknowledging past use of violence; admitting being wrong; communicating openly and truthfully.

Family violence can be difficult to identify and work with in a way that promotes safety. These resources provide practical information about how family violence may present, how you can assess risk, how to communicate with family violence perpetrators and how you can better understand trauma and counter-intuitive behaviour when it presents in your court or hearing room.

There have been significant amendments to the Family Violence Protection Act 2008 since it was first enacted. The following guides assist in understanding these amendments:

These checklists set out key steps in the family violence intervention order process, and ensure judicial officers have complied with all legislative requirements.